We weren’t allowed to touch it, but I got as close as I could. What you see in the picture below are the first words of the Bible (read right to left):

בראשׁית ברא אלהים את־השׁמים ואת־הארץ = “In the beginning, God created the heavens and the earth.” 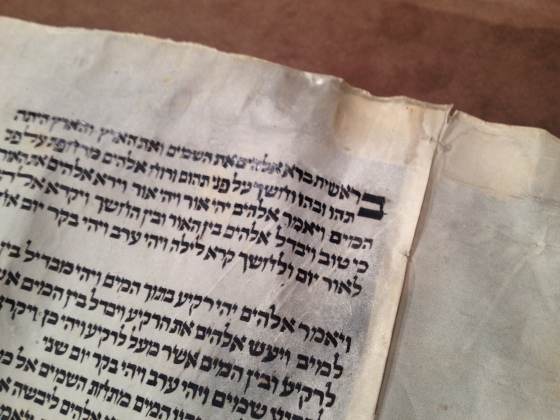 This was an incredibly exciting day for Trinity, as the school became the recipient of this Torah scroll gifted by the Larson family. Dr. Caroll, a prolific collector and expert on biblical manuscripts, was on hand to dedicate the scroll and explain some of its unique features to the interested faculty and students.

This type of scroll has been dubbed a “Giant German Torah,” and is unique in its particular ink color, style of writing, the size of text type, and size of the scroll leaves (or sheets). It is a magnificent thing to behold. The manuscript was copied by a professional scribe in the 15th century onto treated calf-skin, and then used in a variety of Jewish communities over the centuries. This truly is the Word of God for the people of God, the central part of a faith community.

Dr. Scott Carroll drew our attention to some of the scroll’s unique features, like enlarged letters (emphasizing the reading of a portion of the text), patches and corrections (where a scribe made a mistake and had to go back and fix it), replacement panels (when sheets became too worn out to read), unusual orthographic features (like unique writing of letters פ and ח), and formatting choices (like four empty lines signifying the end of a Book). After speaking for a while, he then invited us back up to inspect the scroll and find the features he had highlighted. Professors and students alike were giddy like schoolchildren, especially when recognizing a familiar portion of Scripture.

I was especially excited to find the “Song of the Sea,” a poem that appears in the first chapters of Exodus (Exod. 15:1-18). This is one of the earliest examples of Hebrew poetry in the Bible, and it is a beautiful reflection on Israel’s recent rescue by Yahweh from Egypt. In this 15th century Torah scroll, it is laid out in a unique “brick formation.” By setting this piece apart from the rest of the text, the scribal tradition was not only highlighting its poetic nature, but also its significance to the faith community. They are basically saying, “God will display his mighty works of salvation on our behalf as he did to our ancestors in the Exodus.”

This is an incredible gift to Trinity. Hebrew students will for many years to come be able to have access to this treasure and experience Scripture in a whole new way. As I myself continue studying the Old Testament, I am humbled by the powerful reminder of those who have faithfully gone before me in preserving God’s Word.

Also, here is a picture I found on the post of me listening carefully to Dr. Younger as he makes observations on the scroll.

One thought on “Today I Read a 15th Century Torah Scroll”

We are on the field! Partner with us in God’s work in the Czech Republic: